The AIM/TCD march kicked off once again in Denver, the birthplace of the KKKolumbus Day holiday. This being the 100th anniversary of the celebration of genocide against the native peoples, all out efforts were made for this protest. And it came off as one of the more militant demonstrations against the holiday since protests against it began in the 90’s.

The demonstrations began early in the morning with the Four Directions March. RAIM-Denver was in the West end of Four Directions March at Auraria campus, with a couple hundred others. All the directions had a color. RAIM-D and their allies were at this direction with a sizable contingent, with banners and sky blue and Mexican flags, including our new one “Turn the World Upside Down.” Pigs were there on red dirtbikes, possibly purchased by Homeland Security money coming for the DNC next year. These dirt bikes gave them great mobility.

The other directions converged at the State Capitol building for a short rally. Over 1000 people showed up to oppose Kolumbus Day. Glenn Morris and Russell Means, among others, spoke to the crowd. Then the march proceeded to downtown to confront the Kolumbus Day parade.

[The above video provided by FeistyAphrodite]

From the capitol steps, the march proceeded down 16th Street Mall stopping one of the bus lanes. At the intersection of Stout and 15th St. the rally gathered to oppose the parade in the streets. The Denver Pig Department and the piglets of the Sheriff’s Department were out in force, many in riot gear. There were also pigs in tan uniforms. Perhaps state police? SWAT-type teams were present as were pigs with some new kind of gun that looked like a modified AR-15 with a bulge on top and a non-standard ammo clip. It may have been some kind of “non-lethal” modification to the weapon. They looked like the occupying army that they are.

[The above video provided by some idiot white trash racist blogger.]

Shortly after gathering at 15th and Stout, there was an odd incident. One participant was almost arrested. Another person was arrested and taken away. Undercover police were seen in the area. They were plain clothed, in bandanas and sunglasses. The undercovers were filmed talking on police radios. We later found out that this was the first arrest of the day.

A bucket of fake blood with baby doll parts was thrown into the street where the “Convoy of Conquest” was to come through.

For those that have not seen the Convoy, it is a sight to see. It is a spectacle of white trash.

The Kolumbus Day parade, supposedly a celebration of “Italian Pride,” is symbolic of the parasitism of cracker Amerikkka. It began with the Sons of Italy on motorcycles, racist bikers (it was nice that they found time between beating their wives and cooking meth to attend the parade), followed by Denver cops on their motorcycles. How appropriate, pigs on hogs. Then it followed with a procession of gas-guzzling Hummer vehicles and other cars that looked right off the dealership. Lots of flat bed semis with empty floats and shitty cover bands. A handful of paraders with signs of cities named after Kolumbus was led by two people dressed like a mascot Indian, with feathers and dress, and a Spanish conquistador — how nice. There were U$ military personnel and/or ROTC there. And, the libertarian party was there to defend white property rights. The many vehicles were needed to make up for the lack of actual people for this pathetic white garbage dump of a parade. If you needed any more reason to hate Amerikkka, this parade will do it. Most of the paraders were very old, so it is encouraging sign to know that these crackers will leave this earth very soon.

Several people placed their bodies between the Convoy and the parade route. There were several groups of people and many random individual acts to stop the racist parade. The Denver pigs used pain compliance methods against the protesters who blocked the street. In one instance, pigs may have sprayed mace into some of the arrestees eyes at close quarters — we are not sure about this yet. The pigs also beat and manhandled many individuals. 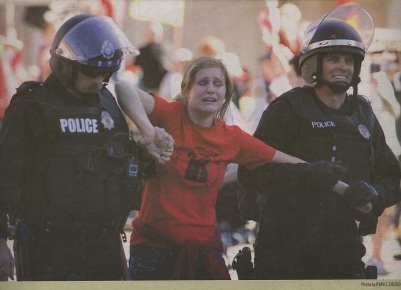 [Demented and abusive pigs smile. Photo from The Metropolitian, October 11, 2007.]

RAIM-D did not witness every brave act of that day. RAIM-D did see one woman in the first circle of arrestees badly hurt by the pigs. Her arms were twisted very badly. Another woman was hit in the face. In another group of arrests, two women got manhandled and hurt with pain compliance by the demented pigs. One of these women was dropped on her head. She looked injured. Russell Means and Glenn Morris were arrested in the streets. One elder in a wheelchair was arrested. The pigs took the AIM staff from one person in the streets. Individuals with a banner walked into the street and were arrested. The police arrested another pile of people who put their bodies on the line. One Indian had his face smashed up, swollen and bloodied by the pigs’ use of force. Pigs refused this individual medical treatment. The favorite tactics of the Denver pigs were pain compliance and dog piling the protesters with brute force. 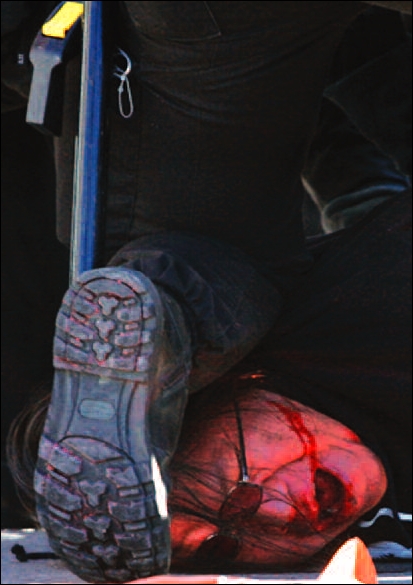 [Photo provided by the Colorado Daily]

These brave efforts delayed the parade for over an hour.

A white-trash blogger or similar scum was in the protest crowd trying to stir up people. RAIM-D members and others confronted them many times. RAIM-D did its share of agitation to give balance to the regular liberal sentiment and chants. RAIM-D is tired of the lame “hey hey ho ho chant fill-in-the-blank has got to go” and tried to mix it up a bit with “down with all settler states, down with the united snakes.” Many asked us to tone it down, but many others appreciated our efforts. 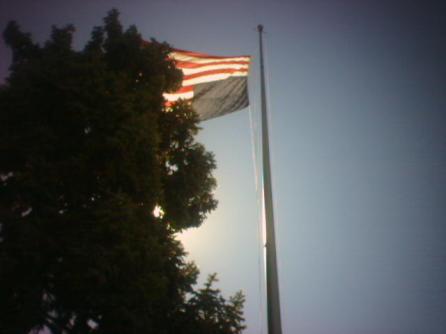 After the parade, the marchers went to the City and County building to await word on their comrades arrested earlier. While gathered there, a number of people took down the Amerikan flag flying above and turned it upside down and secured it in its new position with a lock. It was flying that way for hours.

We later regrouped at the county jail awaiting releases. The sheriff piglets were dragging their feet in releasing people, even those that made bail. RAIM-D and others marched around all sides of the jail. We signaled to our comrades and friends with flags, signs, and our hands. People released said it was a big morale boost seeing us from the jail windows.

Everyone was finally released by the end of Sunday, 88 people were arrested last time we checked. Much abuse went on. Those with injuries did not receive medical treatment. One blind detainee had his cane taken away and was left without assistance. Many detainees reported their property stolen by the jailers. Lawsuits against the city and police are planned by the arrestees.

RAIM-D was happy that so many people of good conscience took a stand. We saw many of our friends and allies there.

Overall, this event was more confrontational than those of previous years. The pigs were taken by surprise by the actions of the demonstrators, not expecting this level of protest. The pigs had lots of new toys and techniques, likely to prepare them for the DNC next year. The media coverage was abysmal, no surprise to anyone here. As tryworks reported, the pig media released the arrest reports, making it easier for vigilantes to harass people. Typical.

Support the Denver 88 by TCD on Fire Witch Rising’s blog.

RAIM-D will eventually try to put up some of our video of the events.