Slave Farm “Marade” “hijacked” … about fucking time
by a RAIMer

Okay, here’s the deal. Denver has a farce MLK celebration every year: The Marade, brought to you by State Farm insurance. Of course, local “good neighbor” corporate insurance company doesn’t give a shit about Black people. In the Marade mix are many sell-outs, reformists and city officials. The Marade is a photo-op for these greedy bastards. 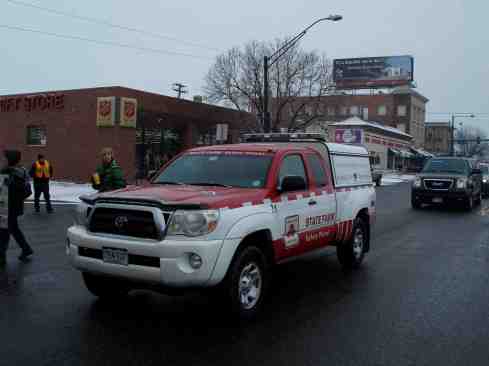 Now, we are not fans of King’s politics. We lean more toward Robert Williams and the Black Panther Party in its revolutionary years. But, the Marade should be opposed, if merely on the grounds of historical accuracy. The only thing the Maraders know of King’s politics is the “I have a dream” speech, incidentally, so does State Farm according to their signs: “We share the dream — State Farm.” Another irony is that King Soopers was the other major Marade sponsor. It was King Soopers security guard Deshazer, an off duty pig, who called a Black disabled elderly woman and her daughter “niggers” in 2006. When Loree McCormick Rice and her 12 year old daughter Cassidy complained, Deshazer called the pigs. (1) This led to a beat down of McCormick and her daughter behind the store. Both suffered injuries, the daughter’s collarbone was broken. Some of the images were caught on the store security tape.

In 1967, King was a critic of the Vietnam War and correctly called the U$ “the greatest purveyor of violence in the world today.” The City banned overt political banners, so this King quote would, ironically, not be permitted in the Marade. King’s politics, which were not good to begin with, have been made worse, sanitized by liberals and reformists.

It was cold as fuck. 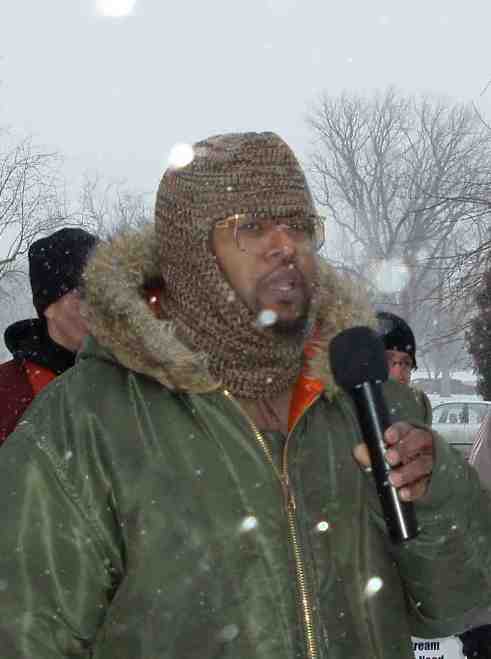 [Shareef speaks at the anti-Marade]

The Marade gathered at City Park around 9AM. There was a counter gathering that attempted to draw people away from the Marade (brought to you by State Farm). A small crowd gathered to listen to anti-Marade speeches calling out the bullshit version of history spewing from the main fountain area where the Marade had gathered. A couple hours later, the Marade headed for the Capitol, Civic Center park. Several long-term stalwarts of the Denver activist scene decided to attempt to take the front of the Marade with anti-war and anti-police banners. 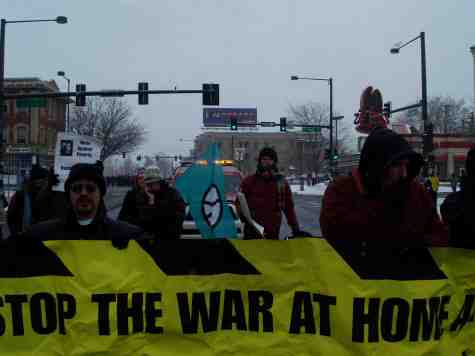 Because of city security, it was not possible to take the very front of the Marade. The Marade was led by a marching band. Between the band and the bulk of Marade marchers, the local activists pushed through security with anti-war and anti-police banners. Security continued to threaten the activists, but eventually pulled back and allowed the anti-war activists to occupy a wide area of space between the leading marching band and the bulk of the Marade. The pigs followed the anti-war activists in several unmarked black blazer-type trucks the whole time of the march. 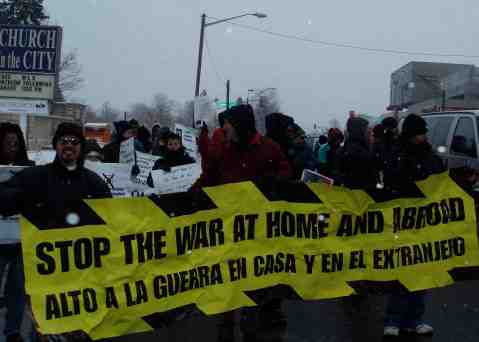 (Larry, who was recently assaulted by the pigs, on the left.) 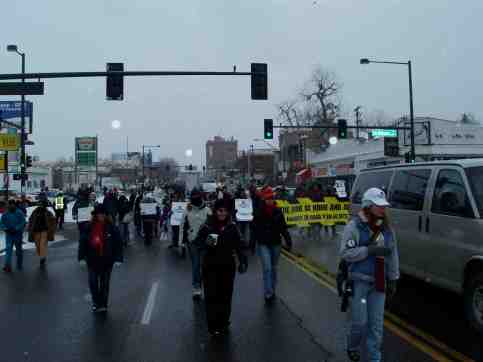 This action was a good example of how groups with widely different politics and approaches can work together tactically.