RAIM was a participant in the Recreate 68 Alliance formed to organize protests against the DNC. RAIM participated the R68 meetings going back over 6 months, aided with security at the events, and-as usual- did our own thing. Despite differences in politics with the many individuals and groups, and some internal antagonisms within the organizing efforts, people came together as a coalition to create space for events this week. Here is our reporting of the days events.

This was the day before the Convention, with the theme End the Wars and Occupations. Several groups had tables at the Festival of Democracy. The Revolutionary Anti-Imperialist Movement and the Mexican National Liberation Movement (MLNM) shared a table all day. Many other groups were present. Along with local activists, national groups like Workers World/Troops Out Now/F.I.S.T., World Cant Wait/R.C.P.-U.S.A., were there. We also ran into or saw members from United States Marxist-Leninist Organization, the Seattle Anti-Imperialist Committee, and Olympia Students for a Democratic Society. Unconventional Denver coordinated various direct actions. Generally, many groups were pro-Amerikan, ultimately wanting to save Amerika rather than eliminate it. RAIM was the obvious exception.

Speakers included: Ward Churchill, Kathleen Cleaver, Cynthia McKinny, Cindy Sheehan, Larry Hales, Mark Cohen, Glen Spagnuolo, Fred Hampton Jr., and others. David Rovics performed to start off the rally. M1 and Stic.man of Dead Prez performed just before the march started. The march proceeded to the Pepsi Center, where the Democrats are scheduled for. Lots of police everywhere, making their presence felt. Despite fear-mongering by politicians, media, and liberals, no incidents happened at this march.

There were many tourists who looked on to our table with curiosity, to say the least. Some looked shocked, as they never seen anything like our stuff. Lots of right wing bloggers and tourists photographed booth. Our Fuck the Troops pamphlet was as usual very popular. So was our new banner: 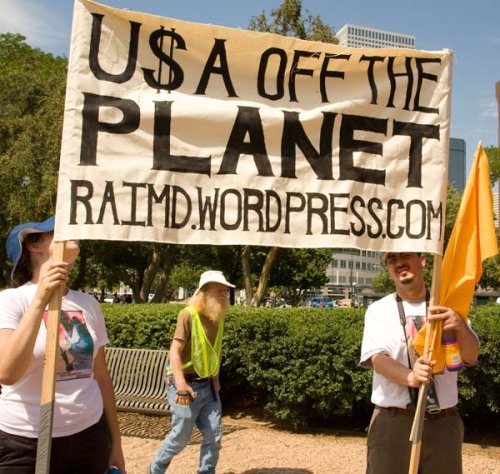 Thanks right wing blogger lookingattheleft.com for our free publicity.

In the after noon, there was a reclaim the streets action. A group of trouble makers fooled the pigs with a diversionary move, causing the pigs to typically overreact and form lines on the west side of Lincoln park. When the pigs had formed their lines, the trouble makers changed directions taking the street on the east side, catching the pigs off guard. Before the pigs could encircle them on the east side, the trouble makers ran down 16th Street Mall, taking several hundred people with them. RAIMD went along, giving some chants including “Hey Hey USA, For Oppression You Will Pay,” and “Dis, Dis, Disarm Amerika.” More on this at dncdisruption08.org.

At Civic Center park, RAIM was tabling all day with our comrades, the Mexican National Liberation Movement. Our literature was appreciated. RAIM appreciated Food Not Bombs delivering to our booth. RAIM also appreciated the music.

Here are some tidbits at the Civic Center festival: The Democrats tried to send in teams throughout the day. RAIM, working with security, had to kick them out a couple times, for Recreate 68 had the permit for the park. Throughout the day, RAIM witnessed undercover police coming out of police cars. They were dressed like protesters or other civilians. Snatch squads would every once in awhile grab protesters at random. In addition, RAIM witnessed predator drones and helicopters flying above the city.

This Day was in solidarity for U.$. political prisoners. There was a Freedom March and rally for political prisoners from 11am to 2pm at the Federal Courthouse. Ricardo Romero of the Mexican National Liberation Movement (MLNM) spoke. Other speakers included Pam Afrika, Kathleen Cleaver, Fred Hampton Jr., Natsu Saito, and some speakers from the American Indian Movement. A letter from Leonard Peltier was read. A recording from Mumia Abu Jamal specifically for this event was played (available here: http://www.prisonradio.org/audio/mumia/2008MAJ/Aug08/DNC8-20-08.mp3).

As Jones has a bigger budget for bullhorning than RAIM, he held out, even admitting he supports Lakota liberation efforts so he’s not a racist. But he blew up at the end before leaving. Expect some whining from Jones on this on his blogs. Were sure we’ll run into him the next few days.

From 3pm to 5pm, RAIM led a confrontation with the Minutemen who gathered at Congress Park. RAIM and others had a sizable contingent in militantly disrupting their rally. The anti-imperialist contingent contained people from across the country. Special props go out to Olympia and Seattle. Slogans included: “John Brown! John Brown! Let’s drive the settlers out of town!”, “Don’t like Mexico, get the fuck out. Down with Amerika, that’s what we’re about.”, and the usual, “Hey Hey, Ho Ho, racist Minutemen have got to go!” One person was offering white sheets and Klan hoods in case any of the minutemen forgot their own. No takers, though. Others told the minutemen that they should go colonize Mars, which began the chant, “Send the master race to outer space.” RAIM comrade Antonio told the minutemen “while you’re all sitting on your lawn chairs here, some Mexicans are stealing your jobs; get off your asses and take them back.” None did. With the megaphone we sent messages about their contradictory stances on migration, like pointing out how the oranges they were eating weren’t picked by white people. In the ultimate of irony, some city workers who were of Latin American descent were servicing the park for the Minutemen rally. They were appreciative of our work.

Despite some provocation by the more trashy of the white nationalist Minutemen, no incidents took place. Overall, we simply make the racists feel like the scum that they are. It was a great action.

From 6:30pm to 9pm, there was an “anti-capitalist” march with a black bloc taking to the streets. The police came down hard, surrounding the whole march, and dividing it into three sections and refusing to let them leave. RAIM comrades were stuck in one of the zones for over an hour. Eventually, after pepper spraying many in the crowd, some of the march was released. Initial reports indicate that there were 100 arrests from this single action.

Check our blog for future news and events. If you’re in Denver, there’s three more days of action, so come downtown.