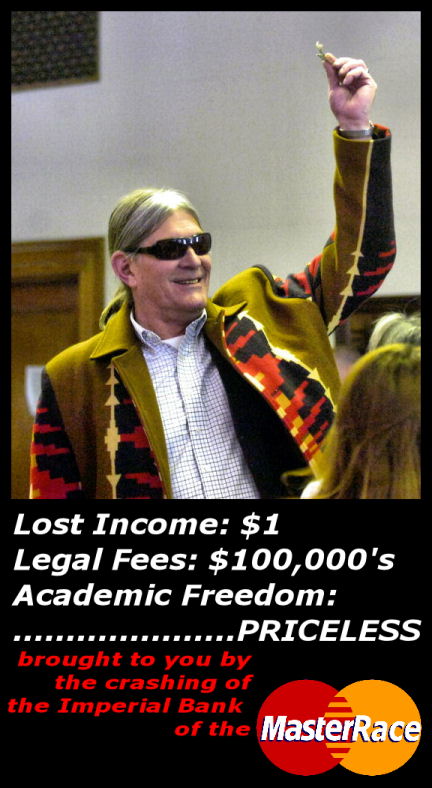 Ward Churchill was victorious in his lawsuit against the University of Colorado, Boulder, with the jury awarding him $1, the minimum amount allowed, as Churchill did not seek monetary damages. Ward was not seeking money but justice, and to get his previous job back. That part of the struggle is still to be determined.

“Churchill briefly spoke outside the courtroom and said, “It took four years. It took a while. And it was quick, it was justice.”

CU “has been exposed for what it is,” Churchill said.

“It was found by a jury that I was wrongly fired,” he said. “They not only violated my rights, but my students’ rights and the community’s rights.”

Churchill said he was satisfied with a $1 judgment and said his case was not about money.

“Reinstatement, of course,” he said. “I did not ask for money. I asked for justice.”

“Churchill plans to initiate a lawsuit against the University. RAIM-Denver wishes him success… The overwhelming issue from supporters was one of academic freedom. Many stood by Churchill while making sure to say that they didn’t agree with what he said. RAIM-D on the other hand says that not only does Churchill have a right to say what he said, but was right in what he said. Amerikkkans are not innocent of the crimes committed by their parasite imperialist nation. Plus they shouldn’t be surprised when those angered by its atrocities decide to hit back. The truth hurts, but Amerikkka has been in its luxury dugout too long.”

The fate of his job, and the judgment of the legal fees for his lawyer David Lane and staff, will still be decided by the judge in this case. Stay tuned for these developments.

There have been some great blogs covering this struggle that we recommend.

Open Anthropology, the source for the graphic above, is a dissident academic with good analysis of the Churchill case, as well as other topics RAIM has interests in too.  http://openanthropology.wordpress.com/

Also our honorary dissident academic Ben Whitmer hosts the Ward Churchill Trial blog.  Great news and analysis on the whole trial through and through. A round on us for your hard work. http://wardchurchilltrial.wordpress.com/