Upcoming Anti-Imperialist Actions in Denver: No War In Afghanistan, No Kolumbus Day

If you didn’t feel there is enough to do around Denver fighting imperialism, this week will be eventful.

First, this Wednesday a march, rally, and after event to protest U.$. wars in Afghanistan, Pakistan and Iraq. Join RAIM as we do our thing and provide platform for revolutionary, anti-imperialist politics.

Then join us this Saturday as we oppose the celebration of indigenous peoples genocide (aka Kolumbus Day).  This year’s protest will be more low key but just as creative in letting oppressors know they are oppressors.

From the Denver Anti-War Network:

EIGHT YEARS IN AFGHANISTAN IS ENOUGH

March and Rally to Demand US Out of Afghanistan

DENVER, October 5, 2009— On Wednesday, October 7, as part of a month of actions around the country, the Denver Anti War Network will lead a march and rally to call for an end to the illegal US occupation of Afghanistan. The rally will be from 4:30– 5:30 at the Federal Courthouse, 19th & Stout, downtown Denver…

The march will be followed by a Justice and Peace Jamboree at the Mercury Café, 2199 California, at 7:00pm, where participants will enjoy music and poetry and share ideas for continuing opposition to the war… 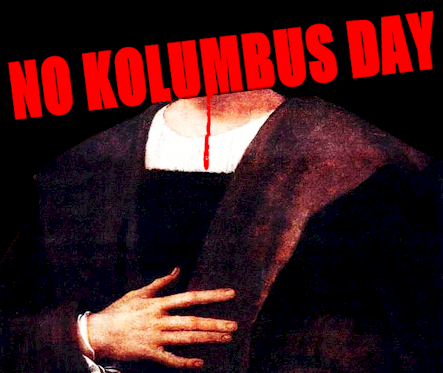 One response to “Upcoming Anti-Imperialist Actions in Denver: No War In Afghanistan, No Kolumbus Day”