Here in Colorado a scandal in the race for state Governor has emerged.  The campaign of Republican front-runner, Scott McInnis, is increasingly derailing due to findings of plagiarism he committed while working for a local, politically-connected foundation. Now, overall we at RAIM can care less about the bourgeois elections in Amerika and have no preference between Mayor Hickenlooper and the Republican candidate appealing to who can give Coloradans more stolen superprofits. We bring this up because the details of this affair is yet another example of Amerikan parasitism in practice.

Before entering the Gubernatorial race McInnis was a congressman from Colorado.  After leaving Congress in 2004 he received a fellowship for the next two years from the Hasan Family Foundation, based in Pueblo, Colorado.

The Foundation is run by the Hasan family, who became rich through profit-based managed health care, and who are prominent Republican donors. Some in the family are entering into politics.(1)  Hasan family members also formed Muslims for Bush in 2004, later changed to Muslims for America. (2)  The purpose of the foundation, founded in 1993 is, “to promote health and education initiatives in Southern Colorado and to bring better understanding of Muslim and South Asian cultures in the United States.”(3)  They gave thousands of dollars to McInnis campaigns, and in turn McInnis mentioned the Hasans two times in the public record in Congress. McInnis was paid $300,000 to write and do public work, like speeches, about water policy. An issue not part of the foundation’s goals. This was likely a sweetheart deal for a former congressman and a foundation who wanted a rising political star on their letterhead.

During the campaign questions arose about the work he did for the foundation, and local journalists conducted investigations on that work. The investigations showed that many articles McInnis wrote were directly lifted from previous writings by Colorado Supreme Court Justice Gregory Hobbs. McInnis presented the work to the foundation, titled “Musings on Water,” as original and as his own.(4) In other words, he plagiarized and lied about it. After the story broke he tried to place the blame on a researcher, with the researcher calling bullshit on McInnis. Many Colorado Republicans, who had made an issue over Ward Churchill’s alleged plagiarism, called for McInnis to drop out of the race because of McInnis’ admitted plagiarism. Campaign staff have also resigned.

The foundation, with egg on their face, conducted an investigation which showed McInnis, shockingly, had not done all the work he was paid for. The foundation demanded the $300,000 payment back (5).

Not only was the work he was paid to do plagiarized, but the rest of the so-called writing is so substandard that even the Hasans found it unpublishable. At 150 pages it came to $2000 a page that McInnis was paid. Local scene-magazine, Westword, had one of their bloggers read through it. The blogger said that the Hasans got this for their money: “Writing that would have trouble passing muster in a high school geography class — a repetitious, rambling and generally shapeless excursion through “fun facts” of Colorado water law, history and topography that turn out to be not fun and heavily padded. Much of it is so embarrassingly basic in subject matter and inept
in execution that you wonder who the hell was supposed to be the audience for this extravagantly priced pabulum.”(6)  The Hasan’s got for their $300,000 a bunch of sloppy research and lazy writing.

RAIM, being Third World oriented, continually points out the amount of unproductive labor in the First World as a result of imperialist exploitation. This is just a more obvious example. Even for academic labor McInnis was by far overpaid. Getting paid vast sums of money for doing next-to-nothing is what life in the First World nations is all about. Under a more just global distribution of resources this money would go to more useful programs to benefit the masses.  Previously RAIM created an article about Water and Imperialism,(7) for much much less than McInnis was paid. First Worlders not only get overpaid, but paid to do much less work. It’s as if First Worlders have an aversion to doing work, a trait gotten from living off the benefits of imperialist exploitation around the world.

Thus we have a simple solution we present to McInnis and the Hasan foundation. Previously we proposed Joe the Plumber be sent to Iraq to help rebuild their water system destroyed by the United Snakes. (8)  We offer a similar option now. Since McInnis is so passionate about water, we propose to send him to a Third World country to do work on water. He would do work that millions of women in the world do now: gather water.  As piped water exists in only 25 percent of homes in the poorest fifth of the world, water often must be gathered from flowing sources like rivers or wells. 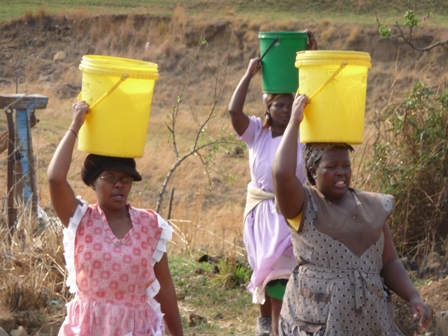 McInnis will be paid $2 a day, which is what the poorest half of the earth live on, for his services. This will likely be the most productive work he will ever do in his lifetime, and he will soon be in need of a gig since his political career is going downhill. This will be a task for most Amerikans when socialism is implemented.  Amerikans will have to give up their overpaid positions and get down and do physical labor for their reparations.  Requiring Amerikans to participate in real labor for human needs will be one part of creating a more equal distribution of the world’s resources, including water and labor.  McInnis in his campaign claimed he will be a “jobs” governor. Well, no better time than now to get to work!